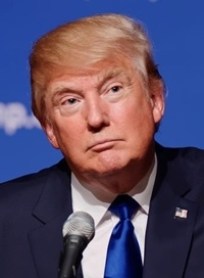 We have learned a lot about Donald Trump recently. We have learned about his political ideas. We have heard Mr. Trump’s proposal about building a wall. Whether your a fan of Donald Trump, or not, I think there is something very important we can learn from him. It has nothing to do with politics. It has to do with health. It does have something to do with walls–a different kind of wall–the wall of your upper airway. In fact, Donald Trump dress shirts can be used to predict the chances that you or your spouse may have sleep apnea.

If you have ever been to Macy’s, although, perhaps not lately, you may have noticed that Donald Trump has his own line of Trump branded dress shirts. If you wear one of these dress shirts then checking your collar size can reveal something very important about your health. Research shows that your collar size can indicate if you are at risk for sleep apnea. Larger necks are associated with a narrower upper airway and more collapsible pharyngeal wall.

Male adults with a neck size of greater than 17 inches, and females with a neck size of 16 inches or more, are at increased risk for sleep apnea. Most people wear a collar size that is half-an-inch larger than their neck circumference. If you wear a size 17.5 your neck is probably about 17 inches. As neck size increases, or Donald Trump dress shirt size increases so does your risk of sleep apnea. If you wear a size 19.5 collar, your chances of having sleep apnea are about 20 times higher than the general population. A study examining larger neck sizes found that 90% of individuals with neck sizes larger than 16 inches in circumference had sleep apnea. A neck size smaller than 16 inches does not mean that you don’t have sleep apnea, especially if you have other symptoms.

When you see Trump take a second

The truth is you don’t need a Donald Trump dress shirt to learn this important fact about your health. Any dress shirt will do. For that matter, any measuring tape will work as well. However, if you will accept this association, the next time you see Donald Trump on TV on the News or hear about him on the radio or wherever, take a second. Appreciate how he is always wearing one of his branded dress shirts and ties. Then think about your sleep and about your collar size. If you are male and it’s larger than 17 inches or if you’re female and it’s greater than 16 inches, talk to your doctor about getting screened for sleep apnea. It may be the most important thing you can learn about from Donald Trump. It could also save your life.

1. Macy’s announced they were ending their partnership with Donald Trump in July 2015.

No comments to show.